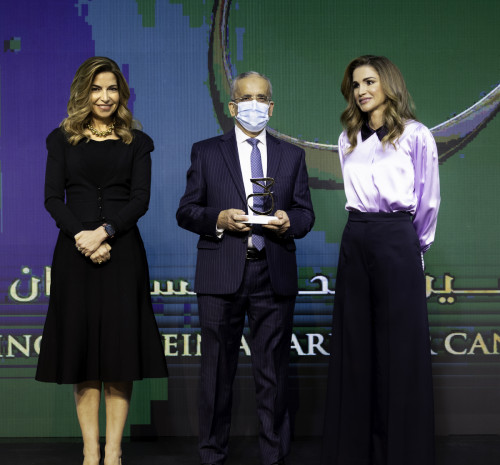 Prof. Abdel-Razeq is a senior Hematologist and Medical Oncologist, Chief Medical Officer and Deputy Director General of the King Hussein Cancer Center in Amman, Jordan. He has also chaired the Department of Internal Medicine and headed the breast cancer service since he joined the center in 2004. Additionally, he is appointed as a Professor of Medicine at the University of Jordan School of Medicine.

He obtained his medical degree from the University of Jordan in 1988, and had his post-graduate training at the Cleveland Clinic Foundation and the New York Medical College in the U.S. Prof. Abdel-Razeq holds American Board certifications in Internal Medicine, Medical Oncology and Hematology. He is also an active member of many international and regional scientific societies, sits on the editorial boards of many scientific journals and has published over 100 book chapters, abstracts and scientific papers in peer-reviewed international medical journals.

Prof. Abdel-Razeq’s major clinical and research interests are in breast cancer; he helped in moving clinical trials, and serves as the principal investigator of many major international clinical trials at the center. Through his active ongoing research, and after securing many international and regional research grants, he has highlighted the peculiarities of cancer-predisposing genes and genetic mutations among Jordanian and Arab cancer patients and their relatives. Along with his colleagues, he is working hard to establish the biggest and most comprehensive clinical cancer genetics program in the region.

With the collaborative efforts of his colleagues, Prof. Abdel-Razeq has worked extensively to upscale cancer care at King Hussein Cancer Center to mirror that of major Western institutions. He is the founder of the largest regional fellowship training program in medical oncology, which has graduated many qualified oncologists serving cancer patients both locally, and across many neighboring countries.