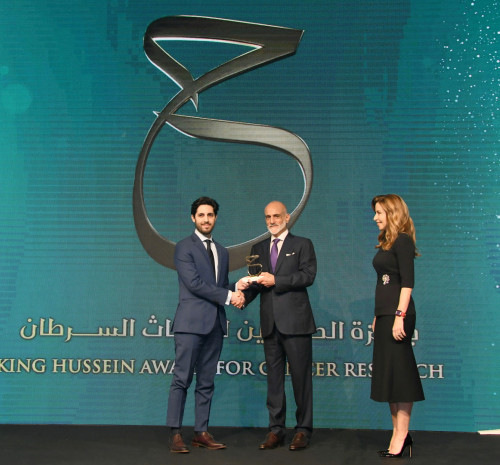 Jawad Fares, MD is a physician-scientist and a resident neurosurgeon at the McGaw Medical Center of Northwestern University. He is currently focused on finding treatments for lethal brain tumors, while maintaining polyvalent interests in global public health and policy.

Dr. Fares’s research utilizes stem cell delivery of oncolytic virotherapy for malignant brain tumors. This work culminated in a first-in-human, phase 1 clinical trial in patients with newly diagnosed malignant glioma. He further works on elucidating the basic mechanisms pertaining to metastatic brain cancer to repurpose effective drugs as anticancer agents. His participation has helped to elucidate MZF1-TUBB3 signaling pathway in breast cancer brain metastases, and its subsequent targeting with the combination of BET inhibitors and vinorelbine. He also discovered a novel incomplete autophagy inducer for metastatic brain cancer and unveiled its mechanism of action through NDRG1 phosphorylation. His discovery led to a US provisional patent, with the goal of repositioning the therapeutic agent for the treatment of brain tumors in future clinical trials.

Dr. Fares has published extensively in the fields of translational and clinical research, including manuscripts in world-leading journals, such as The Lancet, The Lancet Oncology, PNAS, and Science Translational Medicine. Overall, he has more than 100 publications, with numerous citations of his work. He ranked among the top 2% of the world’s most impactful scientists in 2021-2022 according to the Stanford University list that is published by Elsevier.

Dr. Fares received numerous honors and accolades for his research work. He has been named a Forbes 30 Under 30 honoree in science and healthcare, an Arab Youth Pioneer at the World Government Summit, and an IAP Young Physician Leader. Notably, he was selected as one of the world's top 10 young scientists by the premier biotech journal, Genetic Engineering and Biotechnology News. He was also the recipient of the Robert L. Bittner Award on Brain Tumor Research by the American Association of Neurological Surgeons.

Dr. Fares earned his B.S. in biology and his M.D. from the American University of Beirut. He also attained an M.S. in neuropsychology from the Lebanese University. He further completed a postgraduate medical program in cancer biology at Harvard Medical School and a postdoctoral research fellowship in neuro-oncology at Northwestern University in the laboratory of Professor Maciej S. Lesniak.